Disclosure: this post may contain affiliate links. As an Amazon Associate we earn from qualifying purchases.

Showering at home is pretty easy. But how exactly can one shower when car camping? Don’t worry because we found out several options.

During summer, one may tend to sweat  more than expected because of the high temperatures. It becomes even worse if one is engaging in various outdoor activities such as mounting a tent or hiking.

How To Shower When Car Camping

Just because one is camping, they don’t have to let that weird body odor take over. It becomes really necessary to shower in the wild.

If you are wondering how to shower when car camping, don’t worry. We have compiled a list of various utilities you can acquire for outdoor showering and how to use them. They include pop up privacy shower tents, solar showers, battery powered showers, road showers, foot pump showers, bucket or even bottle showers.

Well it might seem hard for campers, especially those doing car camping, to have showers mostly but here are some easy techniques one can use.

This is one most important necessities for showering car camping. Obviously one cannot shower inside their vehicle. Thus, you need something tall, opaque, and portable. 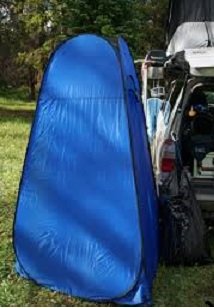 This is where a pop up privacy comes into play. This is built like a tent but this time designed for standing or sitting rather than sleeping.

They usually stand on their own, have mesh on top for letting out steam or moisture, pockets for soap and straps for clothes. You just need to take in your showering utility  such as solar shower or just bucket and complete your business.

They can be used for changing clothes or as a toilet (with other necessary utilities like the portable composting toilet) . One of the best pop up shower tents we have ever used and would recommend is the WolfWise Pop Up Tent.

A solar shower is an insulated bag for holding and heating water . t has a hose for draining water and a shower head.

Well this is the easiest method to use especially to those people who do not prefer bathing with cold water. I love solar showers because they are easy to fill, simple to carry anywhere and also easy to use.

There are various types of solar showers regarding their elements and features, thus one need to consider this when choosing one.

Solar showers can hold about 5 liters of water and above . They are are filled with water then placed under sunlight with the clear part facing upwards for about 3 to 4 hrs to obtain heat.

I would advise one to place it on surfaces that absorb heat faster e.g. dark rocks or even one can place it on top of his /her car dash and take a ride while the water is heating.

Definitely, after it has obtained enough heat hang it on a stand inside a pop up shower tent,hold it up by hand, or even on a solid tree branch that can hold on the weight of the solar shower using its straps or and enjoy the shower.

It is also important to place the clear side facing you so that you be able to measure the water available while showering.

I do specifically like the Advanced Elements Solar Shower after using it for several my car camping adventures.

These devices are most ideal when one is camping off-grid during the cold seasons. This is a chargeable device that is used by most campers.

It is very efficient and most light gadget to carry along. The battery is mostly 2200mAh, has an USB that can easily be used to charge it using a 12v car adapter, powerbank, or even a laptop. It can be used for up to 60 minutes after charging at home for 2 to 5 hours depending on model.

The better part of it has a S-style hook that lets one to hang it safely e.g. on a tree, on a car window thus making it handsfree. This features favors car campers who have kids because under age kids can be bathed using two hands.

Battery operated showers must have charge to be able to draw water from a water tank and push it through the horse pipe to the shower head.

It has a very soothing pressure to anyone which gives it an added advantage. I would also recommend children to use it.

The main disadvantage of this battery operated shower is that you must charge it before use and also needs an external tank or bucket.

If you want this kind of shower, Ivation Portable Shower is a good choice.

These are some of the best to use especially for a car camper or somebody who loves spending most of the time in a van. Foot pump showers are unique in their own way.

Basically, it is a gadget that is pressurized using the foot to pump in pressure thus making it hands free. It lays down fairly compactly on the ground.

The weight of the water is low and makes one feel as if you are showering at home because provides a good stream of water.

The main disadvantage of this foot pump shower is that you are the one providing the pressure and some air leaks.

Road showers are mounted on the vehicle rack system (the same used for roof top tents) on top of the car and makes the car look somehow cool.

A road shower is instantly pressurized that is high pressure can be pumped using a bike pump or a tire inflator and it holds 5-10 liters of water It is very flexible and therefore easy to adjust the water pressure.

The black surface absorbs sunlight and heats up the water but in either way one can use cold water regardless.

The cons of the road shower is that it is expensive and you must have a roof rack for you to install one.

These are one of the oldest and affordable methods to use to shower.

When using a bucket one can just splash on their body using their hands.

The other option is to extras to the bucket such as water switch connector pipes, rubber, and a sprinkler head. They needs to be attached at the bottom of the bucket. The bucket is then hung or placed  on a raised surface so that water flows down by gravity.

For the water bottle option, one just needs a water bottle (about 2-5 liters) fill it with water. This is followed by punching holes on the top of its lid and on the side of the bottle then insert a straw or a tube, this is an air vent.

This is kind a  primitive camping shower but it gets the job done.

The air vent is important because it helps to remove air out of the bottle to allow free flow of water then invert it to allow the water to start dripping downwards towards one body.

In addition don’t forget to carry some shower accessories because you will need them. They are very essential and here are some examples:

It is our hope that we have explained to you how to take a shower during your next outdoor adventure mostly while car camping. This includes the essentials that one should carry along. Let’s keep ourselves clean and do more adventure. Now you don’t have to keep looking for public shower places when you go camping.

Watch the video below on how to use a pop up privacy tent to shower for every member of your family.

Amazon and the Amazon logo are trademarks of Amazon.com, Inc, or its affiliates.